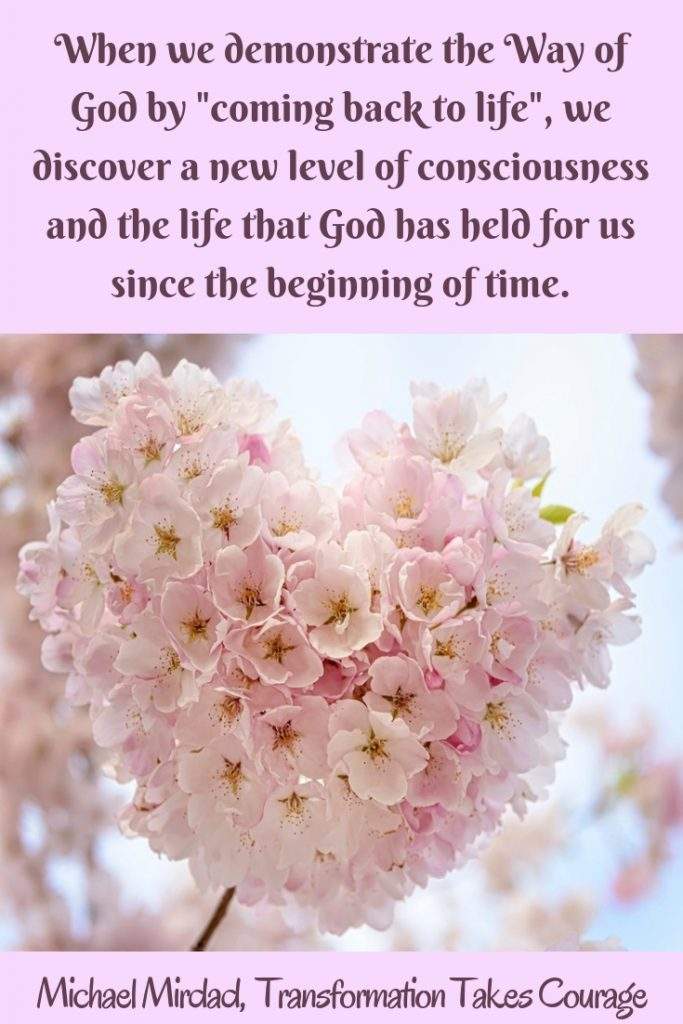 When St. Paul said, “I die daily,” he was clearly referring to the death of the old self AND his ability to fully experience changes or losses of any kind in the fullest way possible. He also advised, “I am crucified [changed] with Christ: and so [although part of me dies] I nevertheless live; yet not the former I, but as the Christ.” This means that only the Christ, or Higher Self in us, knows how to come back to life after dying. The ego self, on the other hand, prefers that we remain dead or that we act lifeless–helpless and miserable as though we are dead.

When It’s Time to Get Up and Move Forward

The Bible tells a story of when King David had a son who was sick and dying. David was constantly praying for the child—day and night—even refusing to eat. But when the boy died seven days later, David got up and washed his face, changed his clothes, and then went into the dining hall and began to eat. People were bewildered at how he could shift from focusing so diligently on trying to keep his son alive and then so quickly into moving on. As long as there was still hope for the child, David was committed to doing all he could to help. But when the child died, King David knew it was time to get up and move forward.

In the latter part of the 1960’s, the Swiss were still renowned as the leaders in producing quality watches. They had more than 65% of the market share and 80% of the profits. But in 1967, when Swiss researchers invented the electronic quartz watch, the Swiss manufacturers shunned them because this new paradigm did not fit into their old paradigm of gears and springs. Japanese companies, on the other hand, embraced the new paradigm and ended up with a huge percent of the market shares. The Swiss portion of the market ended up dropping to a fraction of what it once was, and 90% of Switzerland’s 60,000 watchmakers lost their jobs–all because the Swiss could not accept the death of the old and the birth of the new. The same holds true for everything else in life.

All too often we spend years trying to resuscitate the corpse of a marriage or a friendship or a job only to find it’s too late and that there is no life left in it. Its previous form was already beyond hope but we “hung in there,” in the delusion that the situation was (or could be) something other than it really was. During such times, it’s time to move on and discover what tomorrow will bring. The metaphor of the crucifixion is a great example of this important lesson. Everyone experiences death on a regular basis, the death of a relationship, the death of a career, the literal death of a loved one, or even the death of their former home. All of these are symbolic forms of “crucifixion.” But not everyone “resurrects” after crucifixion (loss or death). Most people allow themselves instead (in part or completely) to remain dead in the tomb. Some of us barely arise from sleep each day after the mini-death we commonly refer to as sleep. But this is not God’s Will for us. We are meant to come back to life after every form of crucifixion (or change).

Why The Ego Fights Change

We try numerous ways to drag out the inevitable. For example, instead of accepting all forms of death and change, we bemoan the loss, fall into despair, wish it weren’t happening, and/or even blame others for the experience. We similarly attempt to delay our resurrection into a new life by saying things like, “I need to express my feelings or be heard in regard to this change . . .” OR “I just need more time to process before I move forward . . .” But the truth is, since God doesn’t feel such a desperate need to “be heard,” nor “time to process or adapt to change,” then why do we? The bottom line is that it’s never the “God” part of us that needs to be heard nor needs time to process. It’s our human ego that needs such, which is fine, and is understandable—especially given the pain we are often in. But it’s our ego that’s complaining because it wants more time to recalibrate the grip that it has on our lives, a grip that it can sense it is now losing.

There is another common tactic that the ego uses to keep us from completing our transformation (death and resurrection), which is that even if we do have the courage to begin taking our first steps into a new life, we often will become too intimidated or overwhelmed by “all the changes” going on around us and end up losing the will and courage to follow through. Again, it’s not God that’s feeling overwhelmed; it’s our ego that’s feeling overwhelmed and it’s because it’s feeling so out of control. So it tries to shake us up and take us off course in order to stall our transformation. It’s wise to see this for what it is, rather than ignoring it or mis-labeling it as “signs” to pause or turn around. We might instead, remain prayerful throughout this time of transition, asking for the strength to remain faithful to our journey toward a new life, as well as the strength to follow-through with any Inspirations that are meant to Guide us along the way.

There is an episode of the old, “Kung Fu” television series wherein “Cain” (the lead character) as a young boy is crying due to the death of his parents. His master tries to console him and advises he learn to accept that death (or change) is a natural process. But the boy resists and remains sad and then becomes angry at his master. His master reminds him that his anger is due to his own resistance to accepting what has happened. The master then also warns the young boy to be careful not to project his anger for his parents dying, onto the master, as that will serve no one.

Supporting Others in Times of Change

When others choose to share their loss with us (or even a complaint for that matter), we often can demonstrate love by allowing them to do so—as it is possible that in so doing, we might help them in the process of “letting it go.” This is the same as assisting them through a healthy form of death. But once they share their pain or issue, they sometimes want to complain again tomorrow and the next day—which means that they (like young Cain) are not actually accepting the death and are not in a healthy state of being. They are doing the same thing as earth-bound souls who are, in fact, dead but are not moving on through the doorway of light that offers them a new life. Instead, they are trying to live in the graveyard of consciousness, refusing to move forward into a better life.

When others do, however, choose to move forward, it’s wise for us to be loving, supportive, patient, and compassionate—offering them whatever might help them to make their needed transition. But if it becomes apparent that they are not willing to move forward and are actually trying to pull us backward into their grave of consciousness, it’s best to for us to get up and walk out of the cemetery. We were never meant to live there. A graveyard is a place of death, not life. We were only ever supposed to go to a graveyard to sit down (or kneel) and say a symbolic farewell to the one who has died. But then, we are supposed to rise (in body and consciousness), walk out of there, and move forward with our lives.

One of the most important sayings that Jesus, Krishna, and Buddha all shared in common was, “Let the dead bury the dead.” This meant that when we go through a death (or any form of change) and refuse to rise and move forward into a new life, we are choosing death over life. If others are doing this, we must let them be. But we, on the other hand, can choose to be a good example to others by demonstrating the Way of God by rising from the dead (resurrecting) and showing what it means to conquer death in any form—including depression and despair. And once we do so, we discover a new level of consciousness—our ascension—and the resulting new life that God has held for us since the beginning of time.