What Ever Happened to Your Hopes & Dreams? 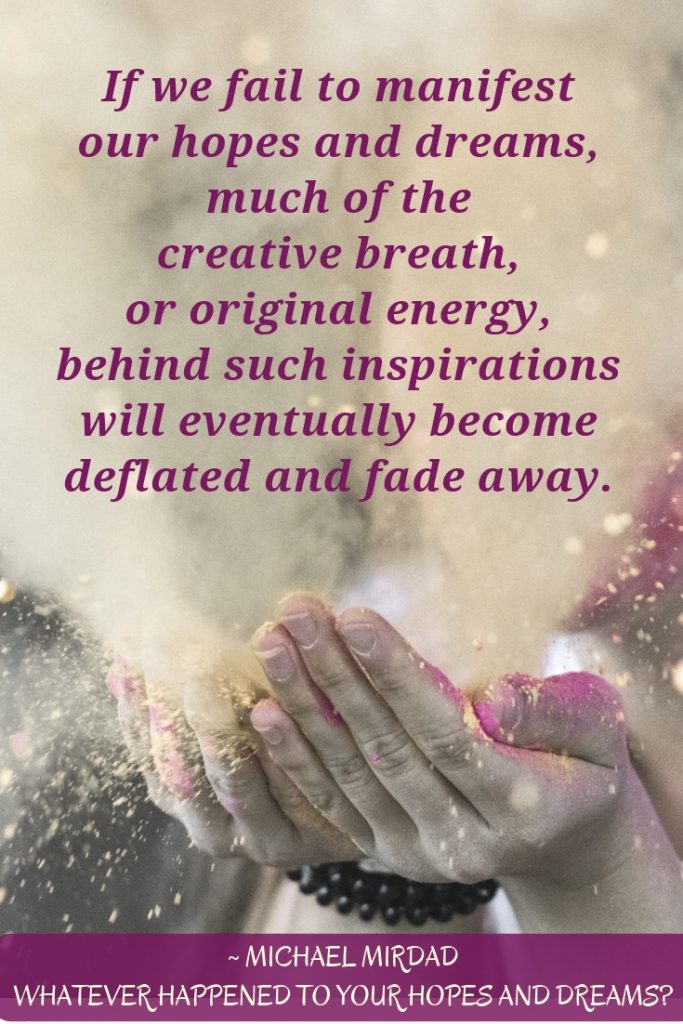 Do you have any personal hopes and dreams or, like many folks, have you given up on such “childish” concepts? Many of your dreams may have passed away, but perhaps you still have a few left. And if you do have any hopes and dreams, are you clear on what they are? If so, why haven’t you brought them into manifestation? Perhaps you think you don’t have enough time or money. Or maybe you are waiting on someone else to help you “make it happen.” It’s also possible that you are afraid, intimidated, or feel you don’t deserve it.

Follow Through with Inspirations or They Will Turn to Dust

One of the most important (and recurring) messages we are learning on earth at this time is that if we fail to “step up,” follow through, and manifest our hopes and dreams, (job, relationship, home, etc.), much of the creative breath, or original energy, behind such inspirations will eventually become deflated and fade away—leaving us with a corpse of an idea that we cling to like a handful of dust. Rarely do we have the courage to look down to our hands and see what remains in our clutches. Instead, we act as though by not looking honestly at what has happened, somehow the dust in our hands will magically turn into gemstones. It’s sad but true.

Most people have not one, but many dozens, of hopes and dreams that remain unfulfilled throughout their life. These unfulfilled dreams do not just sit idly there (in the back of our minds), waiting to be put to use. Instead, some of the energy of these dreams actually becomes our mini creations that cry to be fed. When we ignore them, they begin to suck energy from us (their creators), to keep them alive. This continues until you learn and apply the following powerful secret. These energetic children of ours can only be released in one of two ways: You either have to get out there and bring them to fruition OR cancel them out by consciously choosing to let them go, which is done through the honest recognition that you will not pursue this particular dream. The dreams in which we follow through with actually give us energy because we have now achieved a personal goal and can eat of their fruits. Conversely, the ones we truly “let go” of, also give us energy because by releasing these former dreams and allowing them to pass away, the energy that was being unconsciously drained to keep this dream alive now gets recycled into new, potential greater good for us.

Of course, energy and inspirations never actually die or remain forever stagnant. Instead, the stagnant inspirations that aren’t sucking our energy OR that aren’t being released and let go by us end up getting reabsorbed, back into the cosmos, only to be recycled and given to someone else as inspirations or opportunities. For example, some of us have received ideas, inventions, songs, etc., from the vast creative energies of Spirit, and when we failed to act on these inspirations, they were reabsorbed back into the ethers and redistributed giving someone else the opportunity to act on them and to bring the idea into manifestation out to the world. This cycle continues until someone brings the idea into fruition. To miss these opportunities does not make us “bad” or a “failure.” It only means what we could have had (or could have done) will be given to someone else, and that our own opportunity will now dissipate and possibly return to us at a later date. The universe will remain completely objective on such matters and merely works to get the inspirations out there to whomever might act on them. This universal consciousness holds a vast reservoir of inspiration that is available to anyone who knows how to access its gifts, and pours (or at least attempts to pour) itself into the minds of those who are most prepared or are the most appropriate channel at the time.

When Divine Guidance and Synchronicities Fail to Manifest

Many people have inspirations and ideas (such as writing a book, opening a spiritual center/store, developing a healing practice or  retreat center), only to often find themselves confused or frustrated if/when these visions do not manifest. Or, if they do manifest, they often end up unsuccessful. What could be more heart-breaking? After all, here you are, following what you believe is “Divine Guidance” and possibly numerous undeniable synchronicities and yet the outcome seems less than divine. You are not alone in this. Many students on the path have been through the same thing—even the most successful of us. Of course there are those of us who are worn down by such experiences—even to the point of “giving up” or “losing faith.”

So, why does this happen? Why would God (or our higher self) create seemingly inspired events only to allow them to “die on the vine” leaving us confused and frustrated? Some people (including teachers, authors, and even religions) would tell us that such experiences are God’s way of “testing” us or teaching us some kind of lesson—perhaps a lesson in patience. For this to be true, it would mean that there is a God up in the sky who decided that the best way to teach Its children to love and trust Him (and each other) would be to give them something that opens their hearts to hope and faith, only to then crush them before this opening reaches fruition. This is not the God of Love nor of Christ Consciousness.

The real source of the problem is this. There are two voices in our mind—both trying to guide us—God and the ego. This doesn’t mean, however, that God gives us Guidance only for something “good” (like winning the lottery) while the ego gives guidance for only something “bad” (like financial ruin). This would be way too simple and obvious. Instead, both voices exist in each and every thought, idea, and project. When we make a good, healthy decision, the ego is still there trying to find ways to spoil the moment. And even when we’ve made really poor, unhealthy choices, Spirit is always there with us asking us to learn, heal, and discover how we may allow God’s greater Will and Good for us. Both are always present but there are two goals and distinctions between them: God’s Voice, directing us towards “inner” things, such as positive feelings (love, peace, etc.) and learning ways to grow into our, true, higher self. The ego, on the other hand, directs us towards “outer” things, such as negative emotions (anger, hurt, etc.) and trying to get us to give up and lose hope.

What Can We Do To Further Release the Past?

The first thing we must do to revitalize our dreams, hopes, projects, and even relationships is to release those that no longer have enough energy left in them to be resuscitated, as well as recognizing and releasing those that we will probably not attain or manifest.

Letting go of the hopes and dreams that are unlikely to manifest, takes great courage and trust and might be a little painful to us at first. However, the “letting go” of dead or stagnant hopes and dreams releases energy that can be recycled to become inspirations to new visions and projects which are waiting to be fulfilled. Once again, it’s thevbut classic story that the old must die to make room for the new. We must also learn to identify and release any hopes and dreams that are clearly ego-based and which do not serve our higher good. These are the dreams that make us believe that if we had some particular external “thing,” we would be internally fulfilled. 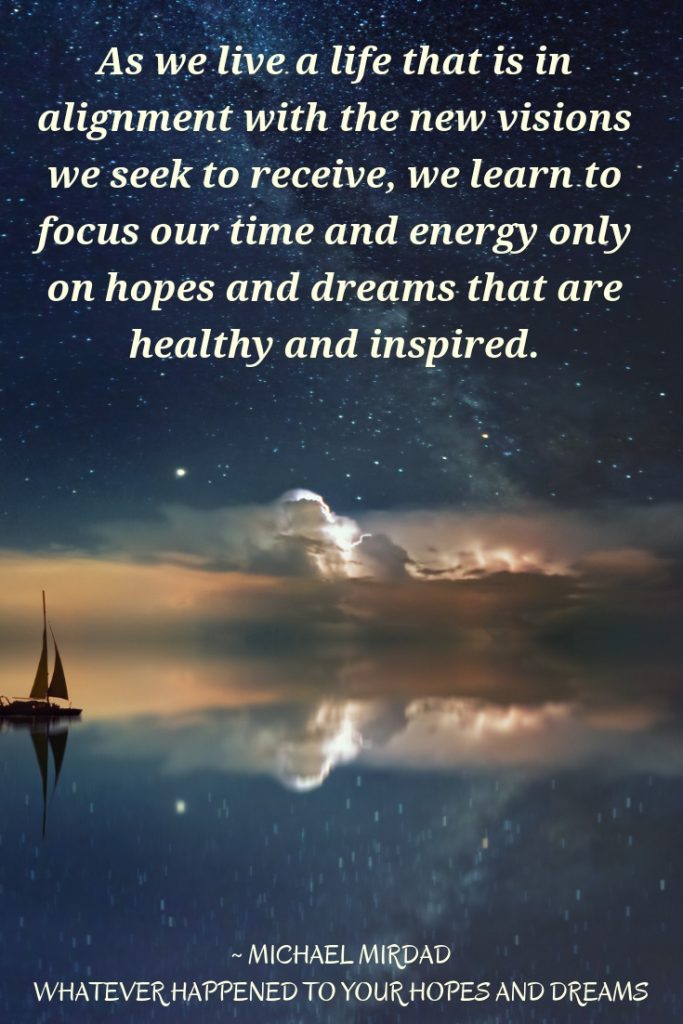 Fulfilling Our Role as Co-Creators

Once we’ve bid “farewell,” to the hopes and dreams that once drained our energy and/or left us unfulfilled, we should prepare to become the clearest, highest, and most divinely guided channel in order to bring into manifestation our new inspirations. Through using prayer and meditation to receive new inspirations we will have a greater chance of manifesting new, higher and healthier hopes and dreams based—this time—on Divine Inspiration. Also, as we live a life that is in alignment with the new visions we seek to receive, we learn to focus our time and energy only on hopes and dreams that are healthy and inspired. Therefore, our newly inspired hopes and dreams, as well as their manifestations, carry the inner and outer feeling of fulfilling our true purpose of being co-creators with God.