Forgiveness: The Highest Expression of Love

The only thing in this world that can bring you all that you could possibly want is forgiveness. This is because forgiveness releases us from all missperceptions about ourselves and others. If you want more money or better friends, all you have to do is forgive whatever blocks these gifts from coming to you. All else that we study on the spiritual path is mere theory if you do not understand and apply the principles of forgiveness.

Forgiveness can enter our lives the easy way—by recognizing its value and choosing it—or the hard way—by becoming tired of the painful effects of non-forgiveness or false forgiveness and by being forced to experience the humbling process of “Dismantling.” In either case, true forgiveness requires that we be open to seeing people and events differently. We also have to demonstrate a willingness to relinquish our hurts and anger (judgments) concerning all relevant people and events.

Although one may assume that an act of forgiveness is always sincere, this is unfortunately not always the case. There are many forms of “false forgiveness.” False forgiveness includes forgiving out of pity or obligation or making deals or pretending that time has healed us. Or, we may think we have forgiven when, in actuality, we have learned to deny that we are hurt or make excuses for those who we think have hurt us. False forgiveness is usually founded on keeping someone in the assigned role of “victim,” which automatically suspends any chance to experience healing and true forgiveness. The more dramatized these roles (victim/victimizer or “good guy/bad guy”) become, the more entrenched the hurt will be, thus rendering forgiveness even more difficult.

There is no escaping the fact that we cannot experience true forgiveness while hiding, denying, defending, or protecting our hurts. However, a healthy and authentic forgiveness process, such as “Soul-Level Healing,” offers a solution for this dilemma of pain and denial.

Besides the numerous forms of “false forgiveness,” there are also many versions, or levels, of true or well-intended forgiveness. Of course any attempt to forgive is better than no attempt at all. What matters most is our personal evolution. Thus, we should forgive according to our highest level of capability, while also developing deeper and deeper levels of forgiveness. If we do so sincerely, we will eventually be able to apply forgiveness toward all people and events.

One of the most commonly discussed aspects of forgiveness is compassion. In fact, most people on the spiritual path consider this to be the highest form of forgiveness. Here we learn to forgive others by choosing to see the person who has “wronged” us as wounded and worthy of our compassion, patience, love, and forgiveness. This is an empowering concept, as it encourages us to develop a compassionate heart. This form of forgiveness falls short, however, if it encourages people to forgive another person simply because they feel pity for them, thinking that they behaved hurtfully only because they are suffering inside. Ultimately, we need to progress to forgiving others even when they don’t have a “hard-luck” story. Instead, we learn to forgive no matter who they are, where they have been, or what they have done.

The highest form of forgiveness is actually not compassion. The highest form is “Spiritual Forgiveness,” which is the practice of forgiving as God forgives. So when you are upset by something someone has done, forgiveness, in its truest sense, means moving beyond even compassion to a level of consciousness that affirms that whatever we thought happened actually did not occur. 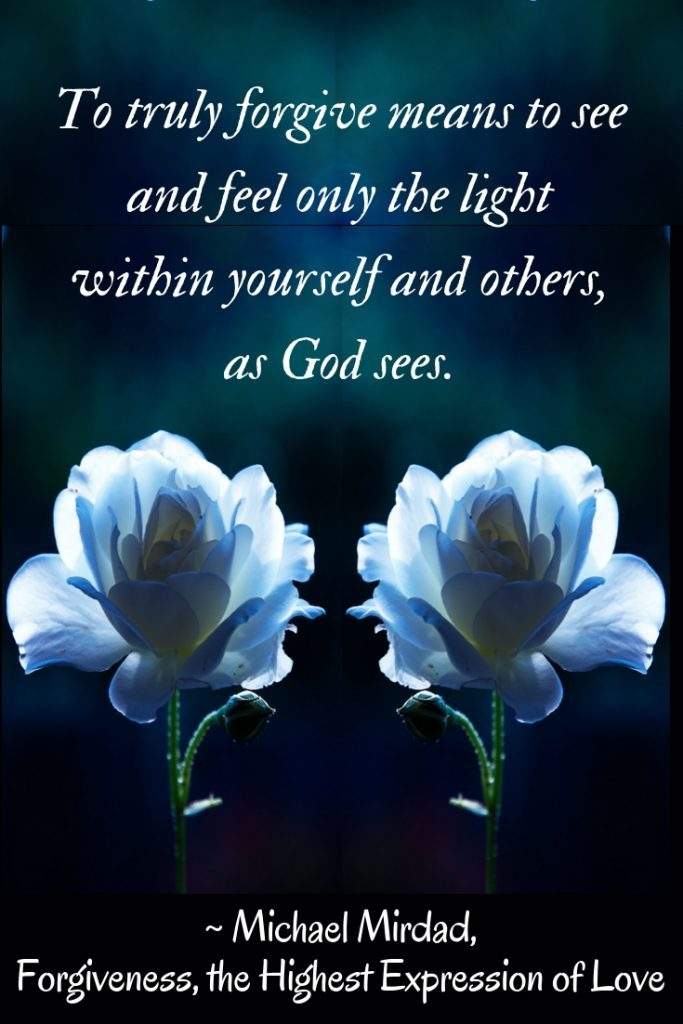 Since God always remains in a pure state of Mind, It can only see purity, never flaws, and therefore sees nothing to forgive. At this level, the highest of human understanding, we realize that there is ultimately no-body and no-thing to forgive—neither in ourselves nor in others. Here we understand that if ever anyone truly did harm us, that person merely acted out (or reflected to us) some unhealed issue we once held inside of ourselves. We now realize that to truly experience forgiveness for others, we must also forgive (heal) the core issues within ourselves.

Thus, any event we’ve ever experienced that seemed to lack Love must have been false or an illusion. Once we understand this, we realize there is nothing to forgive. And although this is the highest level of forgiveness, each person should only practice a level they can understand and believe in.

Spiritual forgiveness heals you of the perception of separation from God, which in turn accomplishes a mini-version of your return Home and starts the process of experiencing miracles in any part of your life. Therefore, when you truly forgive, you are coming closer to “being as God” than in any other moment, because to truly forgive means to see and feel only the light within yourself and others, as God sees.

Now when we ask for the strength and clarity to forgive, it doesn’t mean asking for the strength to forgive someone who has upset us. Rather, it means asking for our mind to be healed of what we thought happened. It doesn’t mean trying to deny that something occurred, as much as it means releasing our interpretation of the event. This includes releasing the power we allowed it to have over us, but this is not the primary focus.

Healing Through the Miracle of Forgiveness

In releasing such perceptions, our soul is restored to its original state of grace. All problems (from sickness to financial) are related to our wounded mis-perceptions and are healed through the miracle of forgiveness. We are released as we release others. This truth is expressed in an ancient prayer stated in a new way: “Forgiven are our debts, as we have forgiven others.”

Since it is our choice to release old hurts, resentments, or judgments, we create our own healing by choosing to forgive. This, of course, confirms that healing itself is a choice. In other words, others may have hurt us, but our choice not to forgive keeps the pain and suffering alive. Therefore, our life cannot and will not improve faster than we improve, and we cannot and will not improve faster than our ability to love and forgive.

Conversely, when we say, “No,” to living a life of love and forgiveness, we keep ourselves bound to the past and out of the moment, wherein Peace is found. When we say, “Yes,” to true forgiveness, we are immediately shifted into a state of “grace”—not the kind of grace where you are granted some sort of spiritual amnesty, but the grace that exists in the mind and soul of one who has accepted his or her original identity—holy and sinless.

But why is it that after so many seemingly sincere attempts to forgive, there are still signs that we have not yet reached our goal and found peace and healing?

Soul-Level Healing Releases the Shadows of the Past

The archetypal story of the helpless damsel held hostage by the dragon is a metaphor representing the human condition. Without complete forgiveness, we are trapped in the thought systems of the ego that tells us we are weak and flawed and that someone else is responsible for our condition. The damsel, who represents our soul, must wake up and realize she is merely dreaming. Then, even when she wakes up, she all too often has become so used to the nightmare of being controlled by the dragon that she still tiptoes around so as not to awaken the enemy. She is careful to be cautious of what might be lurking around every corner.

Like the princess caught in the dragon’s lair, we can still remember criticisms and hurtful events from the past. These haunted memories still affect us, even though they are no longer actually happening. We must learn to recognize that some of our recurring issues are merely shadows and memories of the days when we had not yet healed. Then, we must learn to not react to such shadows and to instead bid them farewell, moving toward greater love and trust, which comes from seeing all things the way God sees them—healed and Holy.