The birthing of Christ Consciousness is not to be confused with the return of Jesus or any other spiritual leader. In fact, it is just the opposite. Two thousand years ago, Jesus left his students and said, “I must leave you now or the comforter will not come to you! (John 16:7)” He was explaining here, and in other teachings, that Christ is not a person to be worshiped, but rather, it is who you are. The “second coming of Christ” is not an external event, but an internal remembrance.

Mother Mary was once pregnant with Jesus Christ, but we are all now pregnant with our own “inner Christ.” Here are some of the symptoms of being “pregnant” with your Inner Christ:

A Return to the Bliss and Love of God

It all started with God, and God is BLISS and LOVE. The Father aspect is Bliss, and the Mother aspect is Love. God decided to create more Bliss and in so doing, expanded into a greater creation, which was us. And we wondered what it would be like to be separate from God, and, as we imagined it, we felt horrible and ashamed that we would think such a thing, and we panicked.

In that moment, we attempted to hide from our pain and chose to “fall asleep” and dream up a far away world–a three-dimensional world that would be  the opposite of Heaven, a place where we would even forget our True Identity.

In Truth, however, we actually never left Heaven and there we forever remain. It’s our choice to see it or not see it that determines our experience. To  remedy our apparent journey away from Paradise, God gave us the Love of the Divine Mother to help Guide us Home. And she does so by manifesting all of our issues and unhealed wounds for us so that we can heal them, thus releasing us from the limitations of this world and release to the unlimited world of God.

The Ego is the part of us that wants to believe our journey Home is futile and will never be accomplished. Our job now is to become Lightworkers who illuminate the world in which we live, so that we may all find our way Home. This is the awakening (0r re-awakening) of Christ Consciousness.

The message or teachings of Christ Consciousness have been alive since the beginning of time. The first civilization on Earth to nurture this awareness was that of the Lemurians—the people who once populated the lost continent of the Pacific Ocean. It was here that goddesses, with the assistance of their celestial Arcturian contacts, acted as guides for the human race. Then, upon the emergence of Atlantis, there were such new messengers of Light as Akanaton, Ra Ta, Isis, and Hermes (also known as Thoth), to name but a few. These great lightworkers used powerful temples and sacred teachings to initiate new masters into “The Great Brotherhood/Sisterhood of Light.”

These masters and initiates were part of a group known as “The Children of the Law of One.” The primary directive of this group was to anchor the Light of God into the Earth’s grids and into the consciousness of Earth’s inhabitants. This tradition and dedication would later morph into the message of the Israelites (Is Real Light) and then was carried over into the teachings of the ancient Gnostics, mystics, and even the enigmatic Essenes, who authored the Dead Sea Scrolls and taught such great souls as Mother Mary, John the Baptist, and Jesus himself.

Two thousand years ago, the way had been made clear enough for a person to be born into the full embodiment of Christ. This person was Jesus of Nazareth. Not only did Jesus live a life of complete expression of Christ Consciousness, but as a teacher he also initiated his apostles and Mary Magdalene into this level of mastery.

Upon Jesus’ crucifixion and eventual resurrection and ascension, the Christ teachings were then transmitted to what historians refer to as the Early Christians—not those of a particular church, but individuals who embraced the teachings of Jesus and dedicated themselves to carrying his message forward.

Because of the power, sacredness, and limited acceptability of these teachings, they were kept mostly underground and disseminated only to the highest initiates. Yet, as part of the Divine Plan, these teachings (which were meant to awaken humanity and not forever to be kept a secret) were also brought to the masses simply through the daily use of loving words and actions.

Passing on the Christ Light after the Ascension 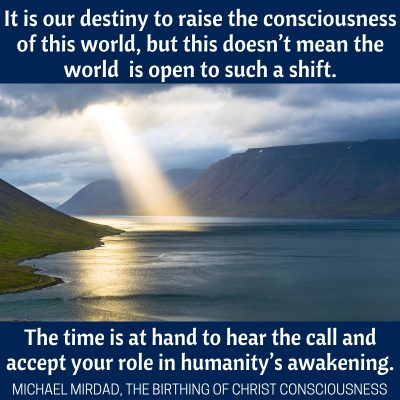 Soon after Jesus’ ascension, his teachings (or transmissions of Christ Consciousness) were taken to the South of France by Mary Magdalene, as well as by her sister Martha and her brother Lazarus. Mother Mary then brought the teachings to England (Glastonbury) with the assistance of Joseph of Arimathea (a former member of the Sanhedrin that ordered Jesus’ crucifixion). These teachings that were brought to England eventually gave birth to the Arthurian Knights, whose job it was to protect and nurture the Christ teachings and many sacred relics related to Jesus, including the chalice (Grail) and spear, (Excalibur).

From here, the Christ Light was kept aflame by the Rosicrucians, a secret society that later became an invisible order (not to be confused with various groups who currently use this name). Several hundred years later, the message of Christ Light was passed on to the Cathars of Southern France and then to the Knights Templar. Soon thereafter, the teachings went further underground and did not surface again for hundreds of years—other than through the bards, musicians, artisans, and builders—all of which who kept the sacred teachings as secret messages hidden within their craft.

New Thought Churches, Edgar Cayce, and A Course in Miracles

Eventually, the Christ consciousness frequency was brought back to the world’s awareness through the creation of several “New Thought” churches, then through the teachings of Edgar Cayce, and then in the form of A Course in Miracles, the major christ consciousness book dictated by Jesus himself in the 20th century. Today, the Light of the Christ is being rediscovered. And although there are still significant groups playing an important role, there are now many individuals who are holding the torch.

Of course, it stands to reason that the more lifetimes any of us may have spent in groups such as those mentioned here, the more we will feel a resonance to them today—including an unexplainable attraction to the life of Jesus or the Early Christians. The meaning of all this is clear; we’ve done this work before and are here once again to play our part. It’s up to us to decide if we are ready to take this work to the next level—the level of doing all we can to assist humanity in the Awakening.

If these concepts resonate, you can learn more about these principles in our 4-day Online intensive training,  Awakening Christ Consciousness.

This is an online intensive for students and teachers of Christ Consciousness. This intensive covers advanced spiritual concepts and profound levels of application, such as learning to live a life that reflects your higher self in mind, body, and soul. The intensive also covers initiations into Christ Consciousness through the rarely understood mystery teachings of Jesus (some of which were transferred to Mary Magdalene).